The official inauguration festivities celebrating President Donald Trump may have ended but foodies with deep pockets in New York City can continue the party with a gilded “Trump” pizza.

The pie, created by Champion Pizza in Manhattan, comes with a price tag somewhere between $5,000 and $10,000– depending on how many heapings of the pricey toppings your heart desires.

So what’s actually on it?

The $10,000 version of the white pie comes with an extra heaping of each of the premium ingredients.

Hakki Akdeniz, who immigrated to North America from Turkey as a teenager, invented the Trump Pizza. This pizza shop owner wouldn’t devulge his political views but hopes Trump will do a good job as the commander in chief. But unlike the business-focused President, Akdeniz designed his priciest pie for a charitable cause. 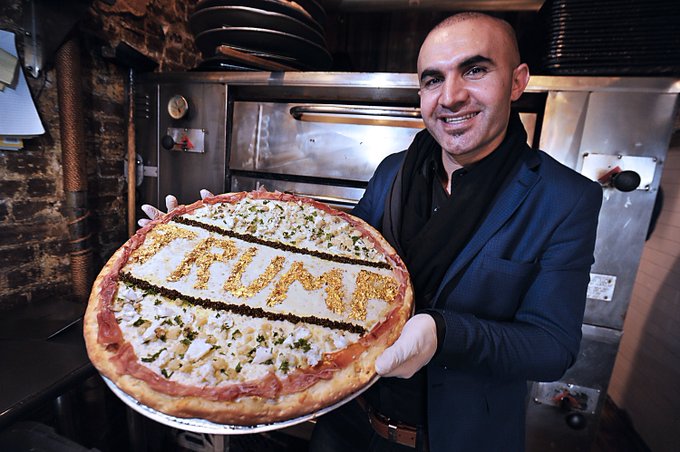 Sales from the Trump Pizza will all benefit The Bowery Mission, a center that provides meals and medical care to New York City’s homeless.

“I want to give them hope. If you work so hard you will make it happen,” the restaurateur said. “Those guys in the shelter have nowhere to go. You don’t know where you wake up or what you are gonna do when you are homeless.”

He said the idea of the pizza capitalizes on the media sensation surrounding Trump while also raising money for a good cause. Akdeniz himself says he spent three months at the shelter, so it’s a cause close to his heart.

“Whenever I pass that place, it makes me emotional,” Akdeniz said of the Bowery Mission.

Want to buy the pie? You can actually only pay for the pizza by making out a check to the Bowery Mission.

The altruistic pizza entrepeneur has a habit of giving back. After hearing that “Stars Wars” actress Carrie Fisher had died late last month, Akdeniz gave out free slices to customers who came in dressed as characters from the iconic film franchise.

Senate to Hold Public Hearing on 2017 Budget, Despite Maintaining Secret...

Nigeria Imports 189.5metric tonnes of Tomato Paste in One Year